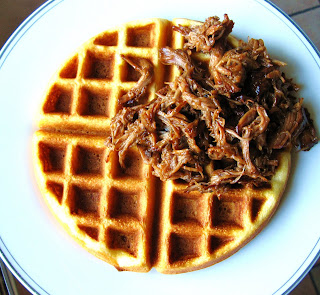 While there are plenty of fanatics out there that treat barbecue like a religion, I am no expert. I do know, however, that I like pulled pork and the cornbread that it is often served with. I have also found a tasty way to serve the two together with a twist.

Pulled pork is great for using up tough and relatively inexpensive cuts of pork shoulder (or Boston butt). Long, slow cooking breaks down the meat so that it becomes meltingly tender. After, it is shredded ("pulled") and sometime served mixed with barbecue sauce.

Oftentimes, "real" pulled pork is slowly smoked for several hours. Since I did not have a personal smoker at my disposal, I used a non-traditional method instead, which used a slow cooker and root beer! I think the root beer added just the right spiciness to the meat when it finished cooking and somehow tenderized it as well. It adds some sweetness to the pork so make sure the barbecue sauce you use is not too sweet as well, or you may end up with a porky dessert.

Actually, the concept of a porky dessert may not be too far off, because the pulled pork will be served on top of waffles. And trust me, there is an excellent reason for this.

Personally, I think the crust of cornbread is the best part. Whenever I make a pan of it, I could very easily just cut off the golden brown top and eat it all. But that wouldn't be fair, would it, since most people I know want that same part.

Luckily, I discovered that baking the cornbread batter into a waffle iron solves this problem. The result? Practically all crunchy brown crust (more than on a cornmeal pancake), and everybody may indulge selfishly. No sharing required.


Adapted from Livie's Mammy at allrecipes.com
Image property of beetsandbites
Posted by Hillary at Monday, September 13, 2010